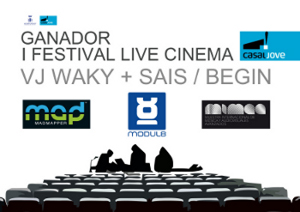 This first edition of Live Cinema Festival of Sagunto ended last on March 10 with a good reception from the public and artists from Sagunto, Valencia, Malaga and Gijon.

Some days dedicated to the creation of videoart in real time that took place on 2, 3, 9 and 10 March, and attended by about 300 spectators.

The First Festival of Sagunto Live Cinema is organized by the local group PSM! in collaboration with the City of Sagunto.

The Valencians VJ Waky + Sais were the winners of this year for a pioneer festival in Sagunto, with their show “Begin”: the story of an inner journey toward self-knowledge and the friction between what we are and what we want to be.

The winning band had to compete with the performances from Malaga “Las flores no lloran” and other group “Thr3Hold” from Gijón. The organizers PSM! also offered their show “50 minutes of lucidity”, though out of competition.