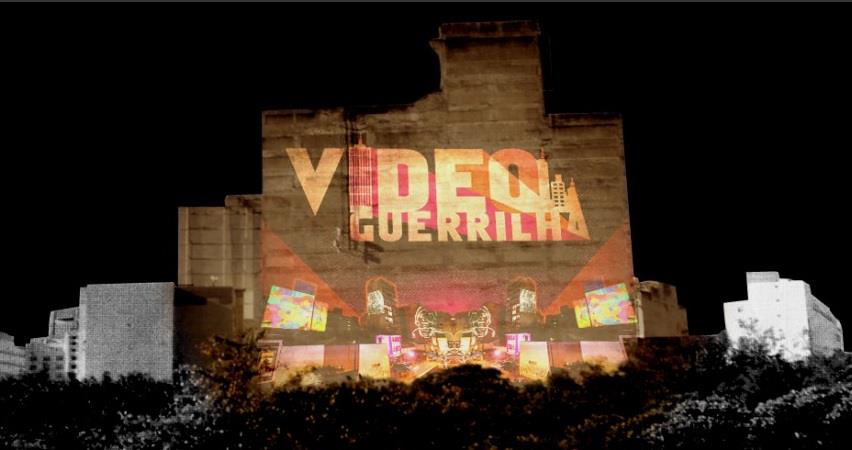 1. Hi Miguel! Video Guerrilha: re-invented urban space reaches its 3d edition. Could you tell us something about the concepts, goals and history of VG?

Video Guerrilha has been conceptualized on the premises that Urban Spaces were not sufficiently represented within this interception art/ urban society, in which addresses the questions what happens in between the perceived and conceive spaces of transit and the transversal creative hidden concepts and narratives, that often are manifested on graffiti and Rap music, a phenomenon of territory demarcation by sub urban cultures a tool to reclaim the emotional and public self “against” the dominant social and political narrative of Globalization and corporate capitalism.

The idea was initiated in 2010 by the fist Brazilian VJ Alexis Anastasiou, that owns the company Visualfarm New Audiovisual Technology. Our goal is inspire young generation of artists to think beyond the “White Cube” post – modern concept of art display, and open up a window of inclusiveness as opposed to the increasing exclusive world society and mainstream contemporary discourse, in which we “offer” the city social and physical architecture, to be a place to uncompromised art experimentation, serving as a mirror’s edge of society, and as a critical voice to expose the fault lines of urban constructs and dynamics.

2. Video Guerrilha is an urban intervention that reaffirms public spaces as stage for artistic projects. How do urban interventions modify the relationship between citizen and city? In your opinion, why is it so important to reoccupy the urbanity?

VG is a platform of connectivity between creative audiovisual practice and the average city audiences, that populate this mot iconic Augusta street, crossing the most important Paulista street and on one site the upper class Augusta street the other side is the lower income street where the VG has been shown, and this so called Lower Augusta is a main connection to the S. Paulo’s historical center. This location is one of the most trendy nigt locations in S. Paulo, especially in the weekends where thousands of young people enjoy the standing comedian cubs, underground performances, bars, night clubs etc and above all we provide to this crowed, during 3 nights an art event in which they actively participate and invite their friends network to show up. It is like they are proud of their “territory” and reinforce the sense of belonging , and identity unique in a city of 20.000 people. This young audience interact, with mixed cultures and social classes contrary to other trendy spaces in the city mainly exclusive to upper class entertainment, and also art galleries and museums often are located on exclusive rich neighborhoods, distant to the Agusta street, except the Museum of Art in S. Paulo the MASP that is close in the Paulista street.

Reoccupation is a metaphor for establishing a creative inclusive footprint in this location that by the way, has been “appropriated” by big corporate building constructions for the rich middle class and they have plans to close all nightclubs in favor for exclusive stores and shops, driven away therefore this young crowd to other locations, so to say the Lower Augusta street will be soon a place of enjoyment for the rich and privilege that do not tolerate the multi-cultural on their doorstep and we will find other locations to carry on our project, probably in direction of the historical S. Paulo’s center that have the most amazing architecture in the city, however is most abandoned during the evening, then we have to energize this center with this VG project, reoccupying this most impressive historical center attracting people there, this is the importance of the concept of VG.

3. You have carried out VG in several cities of Brazil. Can you describe how have these cities host the VG urban projects? How is the situation of audiovisual culture in Brazil?

We are preparing this tour in Brasilia, Rio de Janeiro, and possibly other cities like Salvador and Recife, because we have been encouraged by the overwhelming response, from the 60.000 people that have been there during those 3 nights, as well as the massive press coverage, prime time 9 TV networks, more them 15 newspapers among the front page of the most read newspaper in S. Paulo and in Brazil, the Folha de S. Paulo, and an huge online press that we have estimated on 10 million people that have had contact with VG. I think that is a need to decentralize, the contemporary discourse in making the artistic practice accessible to a wider range of urban public, instead of applying to the established art environment of biennales and museums projects, that indeed in their own right needs to continue to exist, but the VG is in essence an approach to inspire starting young artists as well as professionals to discover other languages and aesthetics, related to urban spaces architecture and interactive new media art. We are convinced that in those cities we will reach a n all new experience in discovering new artists and projects therefore each VG is a unique project re- inventing ourselves all the time, accordingly to the other cities identities and social fabrics.

The audiovisual is Brazil I pretty much oriented accordingly the international trends, with festival like Video Brazil, File, film festivals, and new media art interfaces specially developed in the city of Belo Horizonte, in Rio there are initiatives point out potential development on new media art, but VG has a unique proposal for the urban Spaces that we hope that will set a trend within projects associated with the concept Nuits Blanches, that are already some movement in S. Paulo in this direction. In this concept it I difficult to convince official art institutions to support those initiatives, as well as private corporate sponsoring but hopefully at some point in time they will recognize the importance for the city a well the creative /innovative dynamics associated to these projects.

4. Video Guerrilha project can be related to the concept of Communication Guerrilla: creating little and frequent blitz in the everyday life to provoke moments of suspension in the dominant systems. In your opinion, what are the possible achievements of the New Media Art interventions in the dominant architecture and communication systems?

The dominant systems, in my view, are “crystalized” into the formulas that have been proved to work, and there is the “fear” of the new the provocation and subversion of the established order in which they feel that cannot totally control, it is about power rather than vision. The terminology we have adopted Video Guerrilha, suggests a resistance against the mainstream and establishment within its temporality and constant re invention, that is pretty scare to people used to work on rigid and monolithic systems.

Communication is for us a paramount and pragmatic state of mind, other than the known social networks that we also use on our VG project 2012, a interactive projection in which individual cellphone uses could directly post their chosen images on the projections. Our goal is to contribute, for the renewal of S. Paulo’s historical center, and in other cities as well as to make VG in punctual projects on the periphery, and the Favelas ( shantytowns) in which we have done on favela in S. Paulo, the Outside in Project, and last year in a Rio’s favela Morro da Marta. I think the new media art is taking a significant footprint in Brazil, especially among young and computer educated generation, that have discovered the creative potential of designing software and its technical interfaces with other systems as well as inspired by similar international new media art projects, but at large, the average pubic does not yet found link with this technology and art, therefore all initiatives are experimental and group based exhibitions on a small scale in every big Brazilian city, the major impulse was the File project, organized in a few cities each year.

I think in a very short time, Brazilian artists will deliver substantial quality on this new media art and technology. However, the challenge is how to position these projects in public space, and we are up to this challenge, and the next VG projects we will figure out how it will work.Finally, Video Guerrilha has the public and press endorsement, we have the most advanced image projection technology with new 35.000 ansilumens beamers that can deliver LCD image quality in any surface, as well as a young team of software engineers and we are convinced that this concept is a window to a new esthetics in contemporary art, and we are very keen to connect with international partners to expand the concept and exchange ideas that underpins innovation within the spaces.

We have already 20 international partnerships with 15 countries in Africa, Latin America, Russia, China, Europe, Australia, USA and Canada and we are open to joint ventures with similar projects, festivals, individual and artists associations, art institutions and private companies willing to support us because we believe.