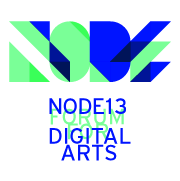 The 3rd edition of ‘NODE13 – Forum for Digital Arts’ is framed by the key topic ‘The Rules – Examining code as shapeable cosmoplastic material’. In addition to the aesthetics of machines and software the week-long festival for digital and interactive culture and art focuses on ‘rules’ of computers and their transformative effect on our society.

“After one year of preparations and more than 500 project submissions from more than 25 countries the visitors can look forward to take an active part in exploring forward-looking ideas, discussing or simply enjoying the festival. Visitors will get an exclusive insight into how multimedia computer technology will shift and extend the cultural and artistic potential.” -Says David Bruell, festival director and main initiator of NODE e.V..

The concept ‘Make.See.Discuss’ is an invitation to creatives and other interested parties in culture and further disciplines such as software, interactive media, stage and performance, video, music, architecture and design. The interdisciplinary program will be even more diverse than before. During the 2013 festival, the Frankfurter Kunstverein will open its doors to the general public every day starting from 6 pm.

See on the Map