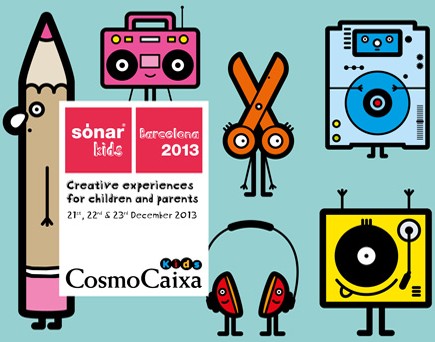 Audiovisual City attended one of the most interesting extra activities organized by SÓNAR during the year: the SonarKids. During three days before Christmas, two workshops and one show have been held in the beautiful context of the Science Museum COSMO CAIXA in Barcelona.

The kids had a great time with their families playing, enjoying and learning about audiovisual culture and electronic music.

Brodas Bros is a company of dance and urban culture. They proposed a multimedia dance show in which children and adults could directly experiment synaesthesia between electronic music and lights produced in the audiovisual space. The audience was constantly invited to interact by using their body: so the children clapped, shouted, danced during the show, sometimes as co-protagonists interacting with the five performers. The “digitale” narrated by Brodas Bros transported Kids in an audiovisual world. We got captivated during the full length of the show and it was really interesting to see the how parents and children were fully involved in the show, having a great time together.

Barcelona Laptop Orchestra was created in 2008 by the Phonology Department of the School of Music of Catalonia, in Barcelona to focus in new musical interface development and new paradigms in network performances. The BLO has created analogical sound interfaces specifically designed for children that played with them and, at the same time, learned about music production in a visual way.

In the workshop, the children could experiment a practical way of learning aimed to stimulate personal and creative approaches to the technological tools. These “child-friendly” interfaces are designed to experiment the music production and the synaesthetic relationship between sound and image.

The parents showed a strong interest about the pro-active engagement of their children in the activities proposed by the Barcelona Laptop Orchestra.

Guillamino is one of the most interesting electronic music producer of the Barcelona musical scene.

During his “0> 100” Workshop of musical composition, he taught to the children how to create musical compositions starting from the sound of the instruments they brought such as plastic saxophone, or a toy guitar, a triangle, a harmonica etc.

He showed all the processes of the musical composition from the analogical sound production to the real time digital manipulation. The kids experimented the extremely usability and expressive outcomes offered by the New Media tools in music.

The body experience is not so sublimated in the childhood where everything happens in a direct way without categorization or over-structures, except for those ones we inherited from our genetic tree. Thanks to physical and emotional mimesis, human beings starts to learn and express themselves. From the first steps in which children imitate the movements, they are able to understand the creative processes by repeating the action and then intervening in it, in their own way.

The events specifically designed for children are a fundamental resource for creative professionals from all ages to discover unexpected possibilities offered by new technologies applied to art and education. The Kids show us innovative and more intuitive approaches to the interactive systems, thanks to a more instinctual and complex way of living and experiencing.

Audiovisual City wants to thank the SónarKids organization for giving us the chance to attend this special event. We wish to see more and more edition of this educative and entertaining spin-off of Sónar Festival!