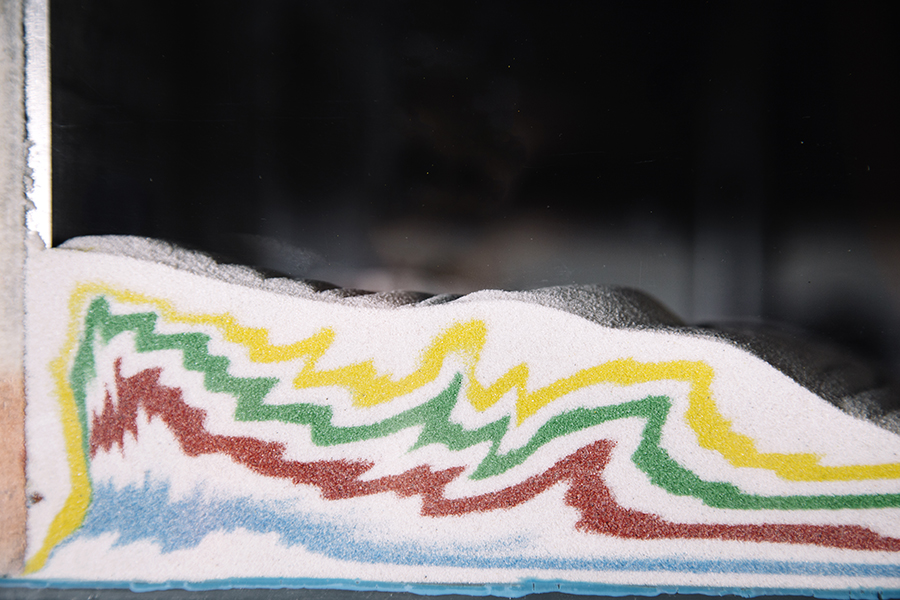 Last week, Audiovisual City had the extreme pleasure to attend a press conference for Sonar +D, where Semiconductor, otherwise known as British artists Ruth Jarman and Joe Gerhardt, pioneers of the digital and natural world, explained their most recent project ‘Earthworks’ to small room of keen journalists. Their work takes scientific data from nature (earthquakes, volcanic activity, carbon dioxide levels in the atmosphere, motion of stars, data from satellites) and depicts it through tangible and beautiful pieces of art. Sound, image and experience converge to report the phenomena of the world we live in, both natural and altered by human activity, through creativity.

The artists consider themselves simultaneously as digital artists, as well as explorers of nature – scientists-come-visual artists. Their imaginative and innovative projects have led them to take part in many prestigious artistic residencies, including with NASA, where they completed their work ‘Magnetic Movie.’

Earthworks is a piece that represents the process of formation of the Earth and the constant changes that take place in its structure and landscape, from those caused by natural phenomena (earthquakes, erosion) to those caused by human activities that determine a new geologic era: the Anthropocene. Five large screens arranged in zigzag are the basis for this multichannel video installation. ‘Earthworks’ displays HD animated graphics that represent movement of strata in minute detail: layers merging and separating in constant movement driven by seismographic data from phenomena, such as earthquakes, volcanoes or glaciers, that this British duo transform into a surrounding flow of sound. This seismic data was collected from the IRIS(Incorporated Research Institution for Seismology) public archive and from the surroundings of PLANTA–the quarry of Fundació Sorigué near Balaguer (Lleida)– with assistance from experts in geotechnology from the School of Earth Sciences of the University of Barcelona. Thus, this work adds fresh, living data directly related to the Anthropocene era. Semiconductor introduces the use of scientific methods in its creative process; in this case the use of geomodels, a technique used by geologists to study the formation of the land by applying various physical forces dyed colored sand in order to observe its behavior. Similarly, “Earthworks” animated graphics react differently depending on the sound that is applied to them at different times.

Much of their work comments upon the way in which the language of science mediates nature itself, since science is the language that we use to ‘explain’ our observations. Earthworks, therefore, is no different, as it enables the non-scientist to view data that they would otherwise be unable to interpret. Though the artists admit that the data is not 100% scientifically accurate, they obtained the data using public domain files of recordings of earthquakes from around the world, searching specifically for dates and locations of specific interest. They explain how since recordings are continuous, that they have a copious amount of data to sort, much more so than any ordinary computer would be able to manage. This is where the University of Barcelona comes in. It turned out that the laboratories at the UB were some of the only accessible facilities with the necessary analogue data modelling equipment required in order for the pair to carry out their investigations.

In order to make the seismic data audible to human ears, the couple have to increase the frequency of the sound wave data in order to bring it into audible range. The interesting thing about the data, the couple say, is that it actually sounds like what it is – the gradual changing of the landscape. With their data based projects they often make their starting point sound and transform this into visual data, however, the process can take the opposite direction: it depends entirely on the nature of the project in hand. In this case, they began by simulating the visual element of the data by using colourful layers of sand, creating landscapes through replicated waves forms.

“Art needs no agenda to approach the subject.” – Joe Gerhardt.

Since they are dealing with one sample per millisecond, (the full data collection and interpretation is still in progress) they had to subjectively decide to include the sound they discovered depending on whether or not they found it ‘interesting’ or not. Here, we can see how Ruth and Joe’s work truly blurs the boundaries between science and art, where subjectivity and objectivity meet to create a visual piece that can be interpreted and enjoyed by all. They are not concerned about the scientific accuracy of their work, but more so about the language of science itself, remembering at all times that it is innately biased, since humans invented it. The key is to alter the time and space reality in which we experience certain things – in this case the vibrations caused through natural disasters, in order to reinterpret and experience them from an alternative perspective.

“They are not concerned about the scientific accuracy of their work, but more so about the language of science itself.”

These artists certainly don’t claim to know or understand anything more than you or I. Nor do they express the desire (at the moment at least) to allow their work to enter into a political realm. What they do offer however, is a new perspective on nature, science and the arts, questioning the very basis of the little that we know about the construction of the Earth and our ongoing impact on its development. Truly fascinating and inspiring work. We thoroughly look forward to seeing how this project develops.