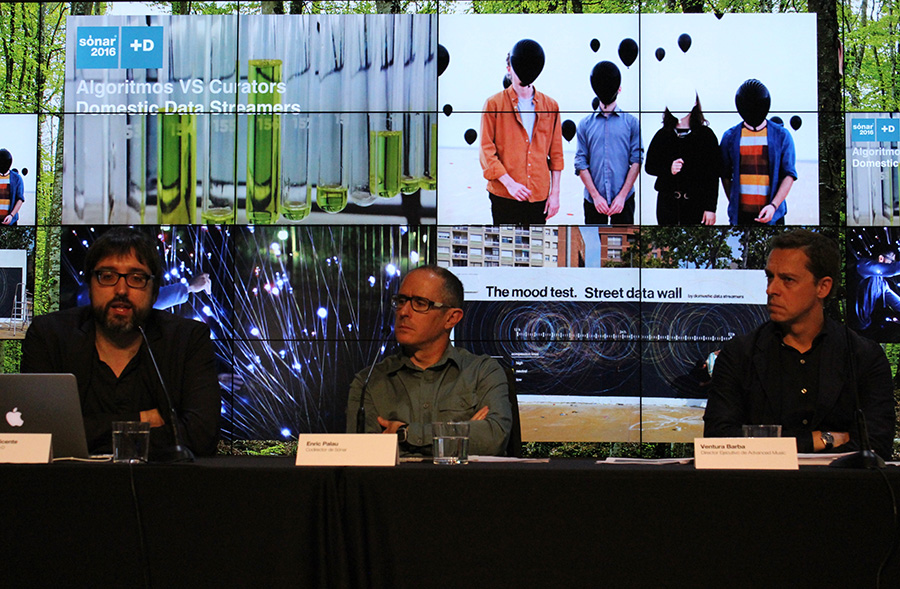 This year’s program for Sonar +D is so incredibly extensive and varied, that it is not a document to be taken lightly, but one to be studied in great detail and with a lot of affection. Last week, I had the opportunity to attend the full presentation of events by Jose Luis Vicente (Sonar + D Commissioner), Enric Palau (Sonar’s Co-director) and Ventura Barba (Executive Director of Advanced Music) at the Mazda Space, in Barcelona centre.

The stats were pretty impressive. We’re looking at 4.500 accredited professionals from 50 different countries, and around 150 activities of all shapes and sizes, with everything from a Start Up garden to virtual reality.

In order to help you to navigate your way through, it’s been broken down largely in 4 areas:

Here’s the official press release of the activities.

Artists and users regain control of technology at Sónar+D 2016

Sónar+D 2016 re-centres the artist at the core of processes of technological and social innovation, and encourages the creative industries to interact with the world of science, education and business.

Sónar+D 2016, the 4th International Congress for Digital Culture and Creative Technologies will be held in Barcelona on 16, 17 and 18 June and takes place within Sónar by Day.

More than 4,500 professionals from 50 countries will participate in 150 activities distributed between the following Areas: the Congress (talks, panels, workshops and networking sessions); the Expo Area (the exhibition space for prototypes and new technologies including a new dedicated zone for start-ups); the Live Performance program (with installations, live shows and VR experiences) Sónar acts as a catalyst for building relationships between the world of creativity, technology and knowledge.

The program of activities encourages interaction between various leading figures from the innovation ecosystem through partnerships with universities, scientific research centres and business.

Among this year’s topics for discussion at Sónar+D 2016: the impact of algorithms on cultural tastemaking and its effect on our daily lives; the challenges facing artists to use technology as a transformative tool with cultural and social impact; alternative models for greater Internet decentralization; the links between culture and activism; the narrative and experiential possibilities of virtual reality or the potential of data to become the raw material for artistic creation.

Sónar+D 2016 is structured into 3 areas, corresponding to each stage of the creative process, from the conception, development and prototyping of ideas, passing through to funding, production and distribution to user interaction.

1) The CONGRESS, which gathers more than 150 speakers and experts from 15 countries, will host 25 lectures and debates, 386 networking meetings and many business activities.

Key figures include producer, thinker and creative agitator Brian Eno, who will give the Inaugural Conference; one of the public faces of TOR (The Onion Router, the deep web browser), the renowned journalist and American computer security researcher Jacob Appelbaum.

Also giving talks and lectures at the Congress will be musicians and producers Jean-Michel Jarre, Richie Hawtin, Carsten Nicolai and Kode9 alongside respected journalists such as Joe Muggs, Cherie Hu, Philip Sherburne or Lisa Blanning. Spotify and the BBC will discuss the rise of the algorithm and its effects on musical tastemaking. A “congress within a congress”, “Decentralize” co-presented by the Elevate festival and We Are Europe, will call for the decentralization of the Internet through a series of lectures and workshops. Also of note will be the talk by Adam Clarke, the leading voice of the Minecraft user community, who will explain the potential of video games as an agent for positive change and as an educational tool. Prestigious scientific institutions such as CERN (the European Organization of Nuclear Research) and ALMA, the world largest astronomical observatory located in Chile, will explain the how and why of their artists in residence programs and the importance of forstering relationships between the world of art and science.

The Networking Area, exclusive to pass holders, will include activities aimed at seeking funding (Meet the Investor), mentoring projects (Meet the Expert) and the Job Market Place, a space to facilitate the hiring of the best talent.

2) The Sónar+D EXPO AREA, more than ever in 2016 becomes an interactive laboratory and playground, with the addition of the new spaces; ‘Startup Garden by RICOH’ and ‘Sónar Innovation Challenge’, as well as an expanded MarketLab. At the MarketLab, programmers, creatives, technologists, hackers, artists and designers will meet with festival audiences to develop projects in real time, with installations and collective experiments: Spotify and Barcelona studio Domestic Data Streamers will present “The Timekeeper” an installation developed exclusively for Sónar in which patterns of user behaviour are visualized, allowing visitors to revisit their musical memories and create new memories for the future.

In the field of music technology, Eurecat (The Technology Centre of Catalonia) will present a number of projects incorporating 3D and Binaural Sound, including an installation that will permit users to literally, ‘move sounds in space’. Also present will be the Zaragoza based Lab, Makeroni, creator of “Eye of Horus”, a wearable device that recently won an award from NASA, allowing to control any device just looking at them. They will also introduce the elmet called “Nevera Mental” (Mental Fridge), a vending machine activated by brainwaves. Little Sun, the socially minded start-up founded by artist Olafur Eliasson, will present ‘Little Sun Charge’, a solar powered charger that will provide electricity and foster growth in areas without access to the electrical grid.

The Maker and 3D printing communities will have a dedicated space, with the inclusion of IMPRIMIDA, Barcelona Art and Design Advanced Manufacturing Camp, an initiative by the Institute for Advanced Architecture of Catalonia (IAAC), which brings together artists and designers who are experimenting with the use advanced digital manufacturing in art, music, design and fashion. This activity is part of ‘IN(3D)USTRY’, the new professional event committed to the 3D printing sector that will launch after Sónar+D.

This year’s edition increases activities aimed at attracting funding and talent with new initiatives such as ‘Startup Garden by RICOH’, which again highlights it’s focus on creative industries, allowing 30 pre-selected startups to present their projects, receive training and meet with leading international investors; the ‘Sónar Innovation Challenge’ where several companies put forward technological problems to be solved by multidisciplinary teams of artists, musicians, engineers, designers and hackers; and the Job Market Place, which fosters the meeting of professionals with employers in the creative industries.

3) Artists working at the forefront of innovations in digital aesthetics take center stage in the LIVE PERFORMANCE program, presenting works by key figures in the worlds of new media and sound design.

A total of 15 tech shows will take place, across various of the festival stages, including Jean-Michel Jarre, Kode9 and Lawrence Lek, Raster-Noton, Howling and Gazelle Twin, among others. Realities+D premieres featuring the latest virtual reality experiences presented at the most recent Tribeca and Sundance festivals, by studios such as Wevr and directors such as Felix and Paul.

The collaboration of the authorities in the consolidation, design and development of Sónar+D is cemented by two agreements that have been signed by the Ajuntament de Barcelona (Barcelona City Council) and the Catalan Institute of Cultural Industries (ICEC) part of the Generalitat de Catalunya’s Department of Culture. These agreements concern the joint definition of objectives and a plan of activities that have an impact and contribute to broad sectors of the creative and business community as well as to local citizens.

Sónar y Sónar+D also form part of “We Are Europe”. We are Europe is the newly-created association of 8 major European events joining forces during 3 years in order to promote, create and produce innovative cultural practices, defined by creative diversity and exchanges. WAE common project aims to develop a prospective vision of electronic culture, technology and entrepreneurship, contributing to new social and political developments with an interdisciplinary approach. The topic for 2016 is cultural entrepeneurship, and following these lines, Sónar+D, in association with Elevate (Austria) and Reworks (Greece), will reflect on the music industry through talks by digital activists, and through workshops, encouraging users and artists to take back control of the internet.

Sonar+D 2016 is supported by the following sponsors: Stage+D by Mazda Rebels will host the headline talks and lectures; Ricoh is the naming sponsor for the Startup Garden, presenting the best new entrepeneurs working in the creative industries: PlayStation will present the videogame No Man’s Sky™ as well as their highly anticipated virtual reality hardware PlayStation© VR. Finally, Fundacíon Sorigue has collaborated with Sónar on the creation of the large scale new media installation that will premiere at SónarPLANTA.

Sonar+D will be held in Hall 4 of Fira Montjuïc, a spirally configured space capturing the event’s spirit of interaction and networking.

All Sónar+D activities will be open to the general public, except for the networking sessions, which are exclusive to Sónar+D bagde holders.

*****
Last but not least, I leave you with some photos from the press conference itself. All photos by Hayley Cantor.