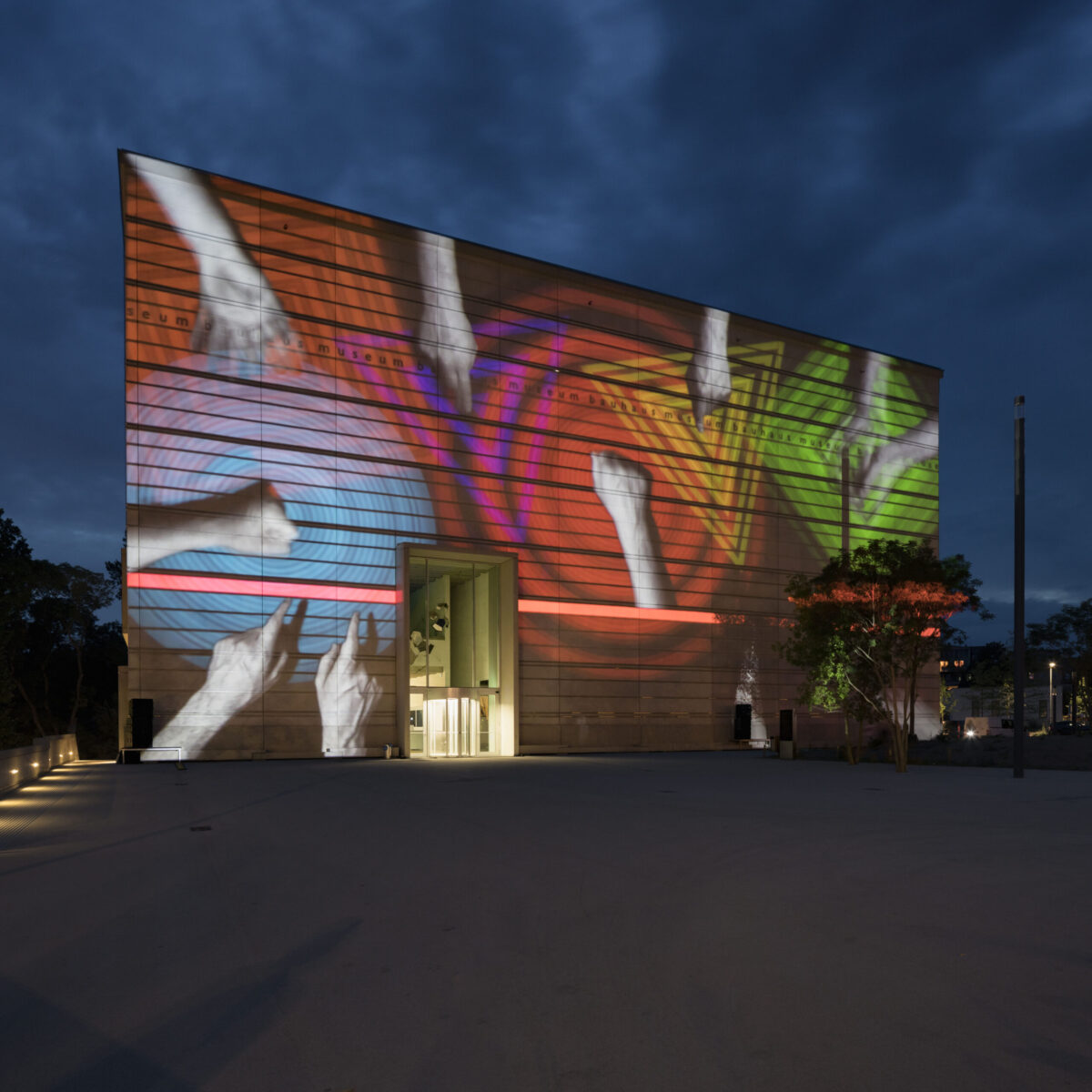 Meet Jonas Denzel, the audiovisual artist behind THE SHAPE OF SOUND, projection mapping on the facade of the new Bauhaus Museum in Weimar.

We said it many times: audiovisual is vast and complex, and within audiovisual the different techniques branch out to a myriad of different styles and expressions.

The projection might not strike at first impact. Nevertheless as soon as you pick up the complex audiovisual interaction and sound design, you realize that you haven’t quite seen anything like that before.

The protagonist is the hand, the starting point of the artistic expression. From a simple gesture the whole audiovisual narrative takes over the building, truly engaging with the audience by inviting them to play along.

As part of our series about the Genius Loci Weimar 2019 winners, our young journalist Marta Minguell asked Jonas Denzel about his creative process and how he approached the audiovisual event open call.

1. Can you tell us about the interaction design process that is so prominent in this projection mapping artwork?

Basically, one person claps a rhythm and the crowd responds by clapping the same rhythm. In “The Shape of Sound” hands on the façade animate the audience through gestures to participate and rhythmically respond.

It’s a game of call and response. The viewers communicate with their hands. It’s a dialogue between them and the new Bauhaus Museum. By responding to the façade, the audience completes the projection. The rhythms are arranged in a way that they become increasingly difficult.

The simple beginning encourages as many spectators as possible to participate. The increase of rhythmical difficulty is not only challenging but also fun for the audience. It creates a feeling of community.

2. The piece celebrates the power of the gesture as an essential tool to create images and sounds. Which have been your sources of inspiration both in music and visual art for this piece and how did you link them together?

Hands are the oldest tools of mankind. They assist us in our everyday life: to work, to communicate, to make music, etc. The work “The Shape of Sound” is mainly inspired by playing drums.

“Body percussion” is a form of drums, where only hands are used to create rhythms and sounds on the body. I translated this to the new Bauhaus Museum and the projection. One can say it’s now no longer “Body Percussion” but actually “Bauhaus Percussion”.

The building transforms into an oversized instrument which is played by hands. For me it’s important that not only the visuals but also the sounds refer to the building. This is why the sounds were directly recorded at the new Bauhaus Museum facade.

Together with sound designer Sören Schaudel, sounds and rhythms were recorded on the actual building by knocking on windows, stroking on rough walls, drumming on railings, anything that makes sounds.

These sounds are then arranged in a composition which is an interplay of image and sound. Recording the sounds on the façade is an essential and inspiring part of the design process of the projection.

First of all, I study the building, the architecture and its history. I then take a close look at the facade and its architectural structure to imagine what kind of musical instrument the building could be transformed into and how it could sound like.

In the specific case of the new Bauhaus Museum, the fine horizontal architectural lines on the facade were used to create a keyboard which then transforms the building into a huge piano played by over-dimensional hands.