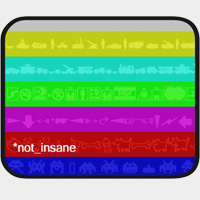 Eduardo  Yugueros aka not_insane began his studies as an artist / animator in Madrid in 1997. He graduated in 2000 Filmayer and starts working in this field as an animator.

He discovers pretty soon the 3D and decides to apply his knowledge about traditional animation to this new technique that brings him to the world of videogames in 2003, the year during which he held a 3d modeling and animation in the studio Virtual Toys Madrid.

In 2004 he returned to his native Toledo and into the television industry for a period of 6 years. The TV work enabled him to experiment with other disciplines such as recording, performing and sound.

In 2010, He starts working as a vj in Madrid and Toledo clubs and founded the chicodecampo company developping videographic solutions, photorealistic 3D architectural renderings, static and animated.