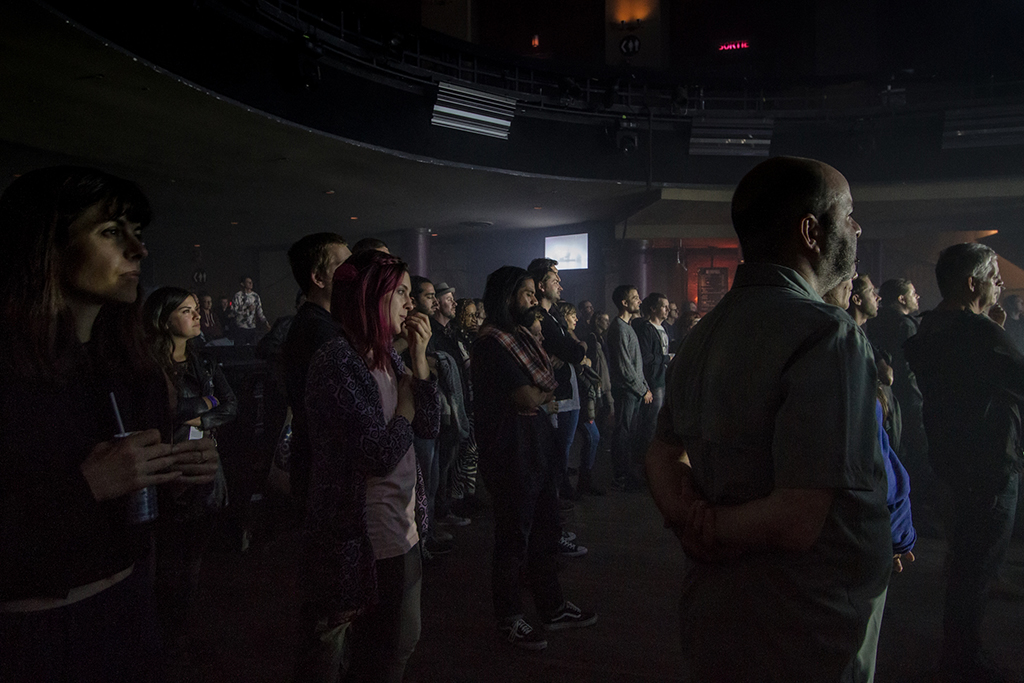 If music is a story worth telling… Then MUTEK is the storyteller, inviting us each year to ride the creative wave.

It enchants us with stories of digital creativity, electronic music in all of its experimental forms, but also with stories on the potential of new technologies and everything in between: live performance, audio-visual art, new and old visionary artists, and visions of a future where artists and festivals would thrive and continue to create and inspire.

Each new edition and each new country joining the MUTEK family is a new story. Thus the story changes based on who is telling it, the teller colouring the story based on the local context, the audience and his or her experiences or beliefs. Nowadays we see 3 main international MUTEK storytellers in Mexico City, Barcelona, as well as Tokyo, with many other MUTEKs appearing and disappearing throughout the years, with such initiatives multiplying ever since 2002.

So what makes a story worth telling, and What makes a good story a good story?
Sometimes the words just pour out of one, while other times the story simply needs more time before it can finally be written.

Let’s start with the beginning:

MUTEK Montreal turned 18 this year, which coincided with Montreal’s 375 year anniversary. It all started back in 2010 with the ambition to create “a sonic space that can support innovation in new electronic music and digital art.”

For this new edition we’ve seen new and old venues, as well as a slight change in the programme. For 4 out of the 6 consecutive days, MUTEK invited representatives of 4 different cities, London, Mexico City, Barcelona and Berlin, to curate and perform for a whole day dedicated to them. Each new city presented a new curatorial angle, exploring and strengthening the links between MUTEK and each of these cities and the invited artists. The value has been placed on community as the core value of the festival, seeing world premiers, exclusive appearances, new forms of music and art expression and free outdoor performances. Under “Barcelona Imaginaries”, we discovered a Barcelona as an idea “incubator”, a city that inspires people into action. And although it does have its challenges in terms or artistic freedom that comes at a high price, the artists are more determined than ever to trust their creativity and find new opportunities outside of the city and on an international level. It’s true what they said, international presenters really have something to say, focusing on the opportunities that technology and collaborations create. We’ve also learned that while the audience in Canada is willing to support the artist, taking risks and paying to see shows that may or may not be to their liking, in Barcelona this is still a struggle to overcome. However, the future is bright and the projects are many, and artists are focusing on their art, regardless of whether or not they have all the technology or the finances needed to match their vision. For it is in the doing that everything else becomes relevant. “Models of Export: When City Festivals Go Global” predicts a shift from a vertical world based on competition to a horizontal community based on sharing and collaboration, stating that we live in a troubled world where creativity might just bring the much needed solutions for a sustainable future. MUTEK Canada presents itself as a tool to inspire and empower the community. By working with other cities they are given the opportunity to learn about artists, scenes and ways of doing things. It is their belief that the festival cannot just be copy and pasted, because it has to adapt to the local context. That which needs to be shared the most is what the local community needs the most. It is all based on an invitation and the point is not to create rigid structures to follow, but instead to allow the creativity to flow. MUTEK is a storyteller, a teacher as well as a student, constantly learning from these ongoing collaborations, therefor it is important for each festival to find its own voice in this interesting technological world, finding ways to make use of technology and not be used by it.

There were many artists that made our festival and many more that we missed out on. No matter how much we tried we simply couldn’t be in 2 places at the same time.

Not all stories are meant to rhyme, and some of the stories told this year didn’t have a clear beginning, middle and end. Those are stories of pulsing drones, glitchy percussive elements and loads and loads of bass.

One of our favourite performances this year was “IMPAKT” by Herman Kolgen (CA), the Master of Destruction. Exploring reactions to shock, violence and urgency, at the limits of ballistics, offering several different scenarios that ultimately could be avoided and transcended to the point where the performance became almost sublimely poetic. “Three Pieces With Title” by Alexandre Burton & Julien Roy (CA), the duo behind Artificiel, was an incredible feat in terms of what sounds can be made of, and how visuals and sounds can influence one another to create something totally unexpected. It is what it says it is, 3 pieces, 3 proposal of what an AV show could be like. Their craft lies in building audiovisual instruments both from hardware and software, merging cameras, synthesizers, acoustic instruments, computers, and video projectors. Filastine & Nova’s (BCN) “Drapetomania”, co-directed by Ricard Soler (BCN) of Obskene, was a kind of manifesto, a revolutionary plead against xenophobia and for a world without borders, appealing to the socio-political collective conscience. They kept us on our feet the whole performance with a piece that was wildly experimental, masterfully mixing together visuals, hypnotic rhythms, live percussion and spoken word. You know good music. You recognise it by that chill creeping up on the back of your neck, making the hairs on your arms stand on end. And then, one momentarily surrenders control of one’s body in experiencing the oneness, the dancing body. This is very much so in the case of the exceptional performances of so many incredible female artists rocking the crowds this year: Marie Davidson (CA), Sarah Farina (DE), Dis Fig (DE/US) to name a few. If music is a story worth telling then the artistic duo, Detroit Swindle (NL), are definitely wizards of their art. They had us up and dancing the whole time with their deep house jazzy beats, with all the twists and turns that a set allows for. It was a pleasant surprise in this deeply experimental and mainly dark techno scene. We left the festival straight after the Saturday’s club night, tired but feeling that what we’ve witnessed was pretty epic. Oh, before we forget, the “MU” in MUTEK doesn’t stand for “music”, but for the notion of “mutation”, constant change and development. And it is in its power to retell, rethink and deconstruct this festival as times change, that its strength lies in.

I guess in the end what makes the story worth telling is simply it wanting to be told, hoping it will transport and inspire others as well.

Thank you, MUTEK, for this incredible experience, and for making each chapter more exiting than the previous one.