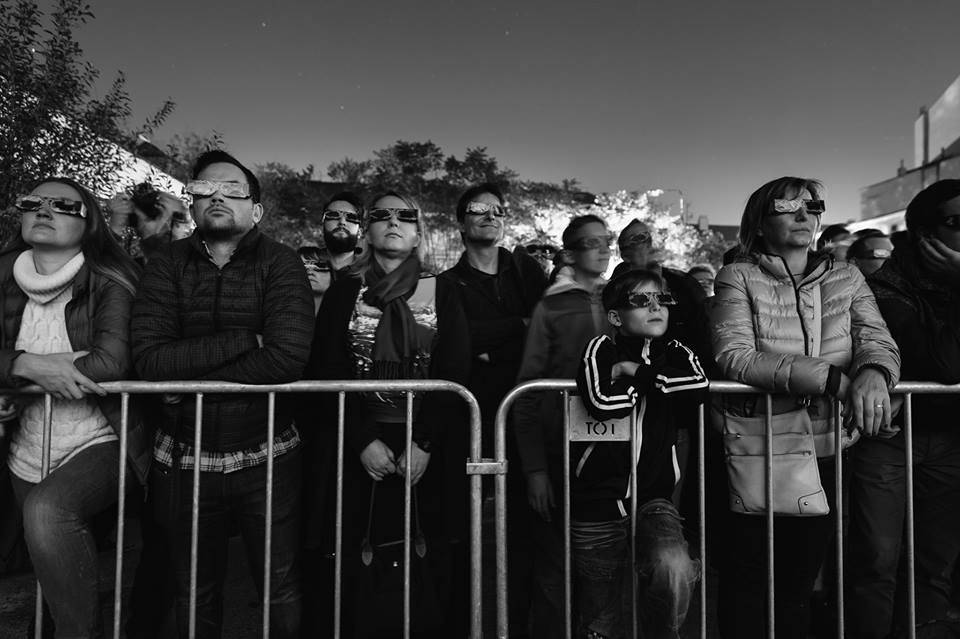 We were thrilled to receive a formal invitation to Prague to attend SIGNAL festival, one of the best audiovisual events worldwide!

SIGNAL is a relatively young event but made a huge impact on the audiovisual culture since the very beginning.

The festival has a great offer of video mapping, interactive installations, and generative art. The last edition attracted around 600.000 people.

Every year, SIGNAL puts together an audiovisual journey across the beautiful backdrop that is the city of Prague. It gives the chance to locals and international visitors to really discover the city under a new light.

It goes without saying that the whole team has been fantastic and they have taken such good care of us! This is what we saw during our visit.

Rococo is a totem made of 124 projectors shooting light beams. As soon as viewers step in, they are bombarded by powerful audiovisual inputs.

The the beautiful ‘Colloredo-Mansfeld Palace’ is immediately turned into an ever-changing space.

The immersive soundtrack makes you progressively forget where you are, bringing you in a captivating trance as you stare at the beams.

Groundbreaking use of video mapping projection to document among the darkest moments in the last one hundred years of European history.

Avoiding the spectacularization, ‘Memory of the Nation’ enthralled the viewers, thanks to clever use of real video and audio footage

3dsense offered an impressive projection with two synchronized screens. It showed a creatively put and well-thought-out black hole’s gravitational field in the universe.

The whole combined with an intense soundtrack displayed a complex unity that immerses you into the piece.

A wonderful piece of interaction design, where the users had the chance to create their own lighting performance by the simple motion of their hands.

Highly involving and easy to approach, it created an instant connection with the audience and the art.

_STROY is a multi-creative studio based in the Czech Republic. In their pioneering project, they combine graffiti with video mapping and sound art.

Quite new to the scene, the AV collective Hotaru Visual Guerrilla managed to capture the viewers’ senses from the first instant.

An amazing 3D video mapping, dragging us in a future world where microorganism, bioforms, breathes and expands from the façade of the surrounding space. A must-see in the audiovisual culture.

Hyperbinary proposed a very mature and cutting-edge video mapping made of pure lights.

The building Kooperative has been animated from the inside instead of being projected on it using LED strips.

A thoughtful investigation about how particles are set in motion and spread across the space creating energy. The result is a calm and monumental wave.

On the Church of St. Ludmila, ruestungsschmie.de delivered a video mapping masterpiece empowered by a stunning sound design by Sound Selektor.

Every single element of the façade came alive under the audiovisual thunderstorm. Our senses were constantly tickled and moved restlessly following the projected narrative across the facade.

‘Watch 2,1/18’ is an ambitious and innovative art piece picturing a dystopian future under constant surveillance.

The immersive installation used moving lights across the Vinohrady square to track the viewers. Microphones recorded their sounds to eventually combine them with an eerie soundtrack. No matter where you moved, you were always watched.

Simona and Matyáš are two students of ‘the Czech Technical University’. They created an LED interactive gateway connecting the train station to their university.

Enjoyable and effective. We hope to see more from these young and upcoming artists.

The Gothic constructive elements are gradually revealed and enhanced by the moving lights, while the compelling music from the organ surrounds the viewers. Our senses are fully absorbed in this powerful audiovisual symphony.

Future Ruins, a beautifully crafted video mapping triggering a dialogue with the LED installations scattered around the park.

It decomposes the architectural elements of the Neo-Romanesque church of St. Cyril and Methodius.

Ruins of a dystopian future lie upon us and come back to life through the use of lights and video mapping.

An interactive installation with mirrors following the viewers, bouncing their reflection across the space together with the beautiful decorations of the ‘Mirror Chapel’.

A buoyant interactive piece immediately connects with the audience of all ages and backgrounds.

An interactive simulation that shows the sea life under a microscope. It’s a never-ending generative art project.

Richard Loskot and UAII studio – Sky on the earth

An interesting representation of the natural elements using new media. A piece with stormy clouds made of foam, lights, and sounds.

An overall high quality and several innovative art pieces, setting new trends and standards in audiovisual culture. Congratulations to the organizers and see you next year!

Interviews to the artists of SIGNAL 2018

Interview to the SIGNAL CEO