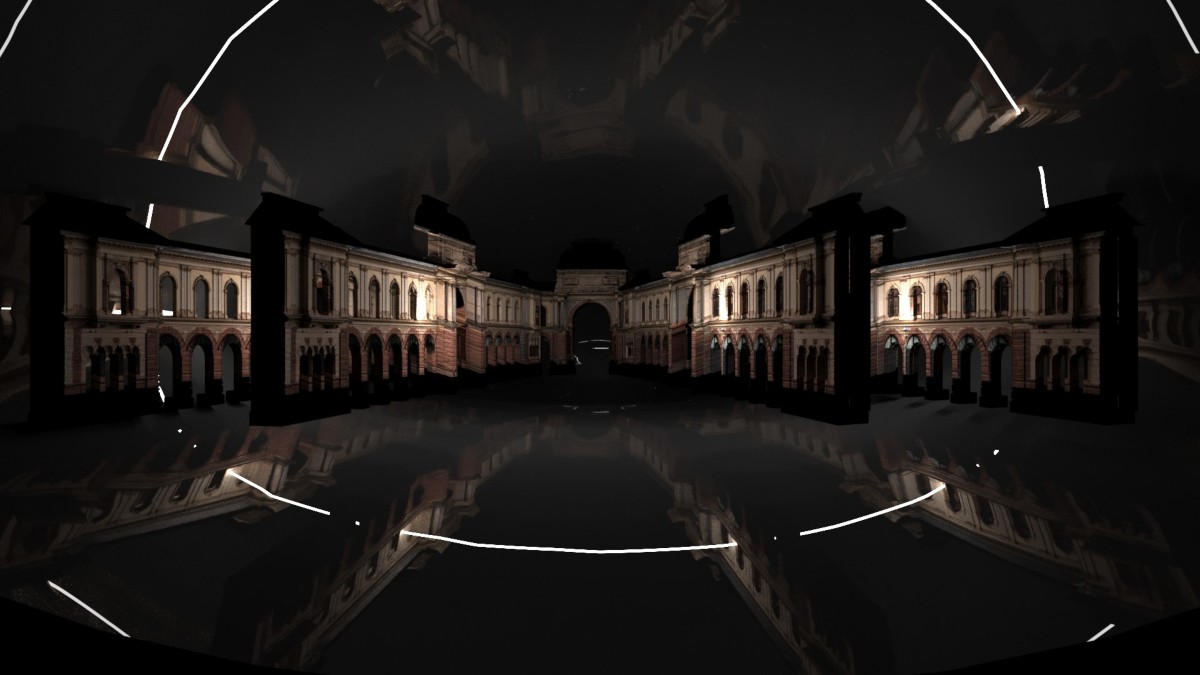 Emanuele Musca and Vincenzo Gagliardi are the audiovisual artists behind INSIDE, projection mapping on the façade of the Marstall building in Weimar.

The audiovisual duo cleverly uses light and darkness to engender a majestic and ominous atmosphere. The audiovisual contrasts are a mirror of the antithetical historic times the building has been through.

From its renaissance foundations, through the misery of Socialist Germany and the rise of the National-Socialism, until becoming an important German cultural centre.

Through powerful content and excellent technical implementation, Emanuele Musca and Vincenzo Gagliardi managed to give a voice to the building itself.

INSIDE profound storytelling speaks directly to our collective memory, showing us the importance of remembrance for building a brighter future.

As part of our series about the Genius Loci Weimar 2020 winners, our young journalist Marta Minguell asked the creators about their creative process and how they approached the audiovisual event open call.

We are very interested to know more about how you achieved the mysterious atmosphere that pervades the mapping projection.

1. Can you describe how you leveraged the contrast between light and darkness in your artwork to create such a unique atmosphere?

The contrast is at the core of this project. The combination of elements of light and darkness represents the troubled existence of the Marstall, victim of the political changes during the history.

Fascinated by the baroque still life paintings and the interplay of the shadows in the architecture, we focused on recreating that atmosphere in 3D, which emerged in an aseptic but very detailed result in terms of realism and textures.

The robust facade extrusions stretch out the structural elements to grasp the last rays of light when the dying sun leaves the space to the cold night (“endarkment” of reason), to be reborn, after the darkness, in a rejuvenated light (positivity for the future).

We want to highlight that the Marstall reminds us how hate and rage can twist something as harmless as a riding stable into something as brutal as a prison.

2. Could you explain to us the concept behind the sound design, especially mentioning the incorporation of voices?

The goal of our sound design will be to drag the audience away into a spiral of memories, fears and smashed dreams. We want the listener to feel the realities that the building experienced from his foundation.

Sound has always had a key role in our life. We create music. At the same time we are both involved in the Berlin electronic music scene organizing events and working with the labels: Modern Bön and Vu-Mantra Records.

We are particularly fond of experimental electronics and living in Berlin is obviously a constant source of inspiration.

Music can also be a mirror of the times, which is why we are planning to mix small samples of meaningful music, heavily treated and broken with effects and granular synthesis, with sounds produced through hardware samplers and modular synthesizers.

The vocal sound in the submission is a sample from the 1936 Olympics Opening Anthem by Richard Strauss which fades in some notes of the No. 3: Nocturne in A-Flat Major by Franz Liszt.

Both sounds have the incredible power to instantly grab the attention and trigger strong emotional memories.

The first one recalling the illusion of greatness of the rising National-Socialism and the other one, reminding the beauty that the wounded city of Weimar holds in its spirit.

That was our very first submission to this kind of contest. We are very good friends but also collaborate together for different projects.

We work together, share opinions, learn from each other, so that our artistic chemistry has already consolidated.

When we decided to apply for this contest, it was a usual after work dinner.

We started brainstorming and preparing the material, one more focused on the 3d animations and the other on the sound design, but still working in parallel and sharing the results of the job.

It took a couple of additional nights to finally find the right direction but as soon as we did it, it was really exciting and we started immediately to work on it. We went through difficult moments, also stressful ones but it was worth it.