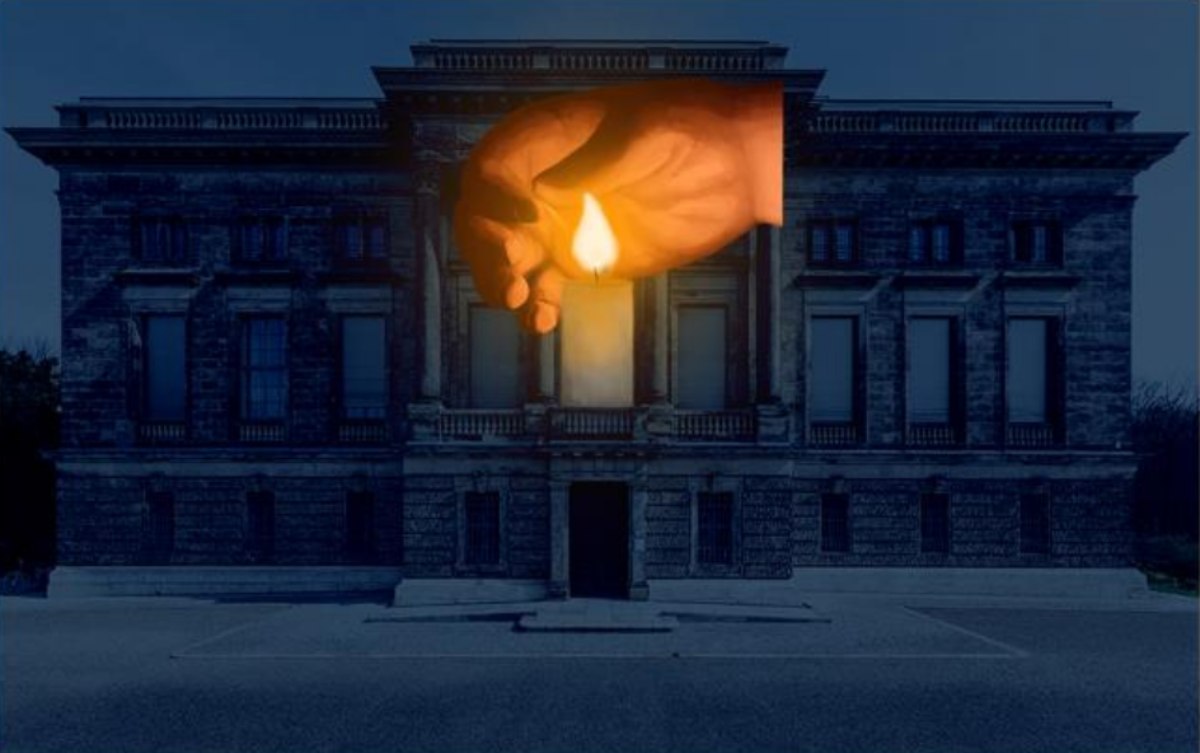 Soheil Seraji and Nadira Madreimova are the audiovisual artists behind WEST-EAST CONVERSATION, projection mapping on the façade of the Goethe & Schiller Archiv.

Animation artists Soheil Seraji and Nadira Madreimova have approached a building façade for the first time. The result? A uniquely intriguing piece of projection mapping!

The audiovisual narrative is complex and it requires more than one take to be truly understood.

Nevertheless the stunning aesthetic and elegant storytelling have an immediate impact on the spectator.

The conversation between east and west is explored by leveraging the cultural differences in the sound and visual expressions. A powerful immersive narrative takes us by hand on this wonderful oneiric journey.

I believe sometimes projection mappers can get a bit sidetracked by the spectacle and the technical realization. That is why is so inspiring to have a fresh take from “outsiders”. Something that Genius Loci Weimar knows really well.

As part of our series about the Genius Loci Weimar 2020 winners, our young journalist Marta Minguell asked the creators about their creative process and how they approached the audiovisual event open call.

1. Can you give us insights about your creative process to build the visual narrative, and how the sound is conceptually connected to the images?

Goethe had a special relationship with the east, in particular with the most prominent Persian poet, Hafiz. We are from the east, so we decided to work on the Goethe Und Schiller Archiv building.

We started to read Goethe’s poems thoroughly and…. wow! He speaks about something we live everyday! So the journey began for us. We found out that there is a close relationship between his thoughts and our culture, our background.

We understood that we could easily make our visual world based on his poems. Therefore we decided to use the concept of “journey to east” for the artwork, which was explicited in Goethe’s poems. As you can gauge from the first verses of West-östlicher Divan.

We are eastern artists so we know the way that east has been represented to the west world. Mainly from a biased and unrealistic point of view.

So, we understood that the journey should represent east as it is and how we live it, not as it has been represented.

Goethe had a realistic view of the east and paid tribute to it, in spite of being from the west.

Hence we felt Goethe could be the point of unity between east and west. We had to build a perspective that depicted a realistic east and, at the same time, as it is expressed by a western man.

We paid our tribute to Goethe and his most important book and started the “west-east conversation”. We decided to portray a journey to the conceptual east, somehow a dreamy journey.

Therefore we avoided overused cliché and we tried to show the eastern soul through a video lead by a western poet.

Then we struck up a conversation between west and east. We depicted the calmness, softness, elegance and pleasance of east through movements and connections between forms.

As you can see, there is no cut between the scenes and shots, everything is part of a continuous flow. Everything is in a calm and pleasant state.

At the same time we didn’t represent any form or scenario unfamiliar to our western audience.

He/she hears Goethe’s poem in an eastern environment simultaneously watching some familiar objects and forms like the train, the lighthouse and the car. In the overview, she/ he encounters the flowing concept and spirit of the east.

In addition, we thought about the different tasks we had to carry out for this project, being our first mapping projection.

We followed the conversation in music too. For a deeper perception of the visual image, we used the sound represented by voice, music and noises of natural objects.

Projection mapping usually only uses music and noise.  We found a more original solution: we made the image more visible with the help of a voice that recites Goethe’s verses.

Inspired by Goethe’s and eastern poetry, someone dreams of visiting the East where life is simple and wise.

Music and visual images are not tied to specific frames.  We didn’t try to show the eastern lands, but the true concept of the east.

Our task is to evoke emotional, figurative and spatial sensations of the concept of the East through the music of Sepehr Seraji. Inspired by western classical composers, we knew that would be familiar to our audience.

2. Can you tell us about the challenges and creative opportunities of working with projection mapping, coming from an animation background?

[Soheil Seraji] That’s a really good question! I have worked with this painting-like animation style over the last few years.

What I find interesting about this particular style is the depiction of figurative, realistic pictures and concepts in a generalized and abstract point of view.

For example, you can recognize the touches of brush but simultaneously you can see the sea wave illustrated by the brush.

Projection mapping allows us to show our point of view very explicitly because of the size of the building façade.


The coexistence between figurative and abstract of this animation style can be expressed and emphasized through the projection mapping.

As we explained above, another creative opportunity in this project in relation to my animation background was to consider the building as a screen.

I thought what can I do with this new and different type of screen? I can consider the building as a sketching notebook in front of me. Hence I started to freely sketching on it.

Finally I realized that I can activate different aspects and volumes of the building. I have set the shots and forms according to these aspects of the building, like the windows and columns.

Of course, there are challenges and limits, like the special aspect ratio for the video, the huge number of frames and layers to manage for an appropriate representation.

It is clear that these problems are not important at all in this project, since we have a limitless creative environment in front of us!

Yes, of course! It is not as simple as taking a fixed approach to every festival and event.

We prepare different projects for different types of events and our approach changes according to the type of event.

For example, lots of film and animation festivals accept diverse films in style, length and subject. The works we submit to these events are based on a personal idea that don’t pay attention to the uniqueness of the festival and its subject.

Another kind of festivals are the video and art festivals. When submitting to the events if our works are not matching the open call we start working on a new project.

Each project is based on our previously brainstormed ideas (and of course, we have an “ideas bank”!). We then grow the idea in a way that fits the open call’s guidelines.

What we have done for Genius loci Weimar is a totally different approach. As we haven’t done anything like this before!

We started our project from scratch, in order to create a truly original artwork from the first concept, with no preconceptions based on previous ideas.

Eventually, the approach depends on the conditions of the festival and the time we have to prepare our work to meet the deadline.

In this case the COVID outbreak helped us a lot! The day we found out about the event it was literally the deadline day! Fortunately, Genius Loci Weimar extended the deadline due to the pandemic.