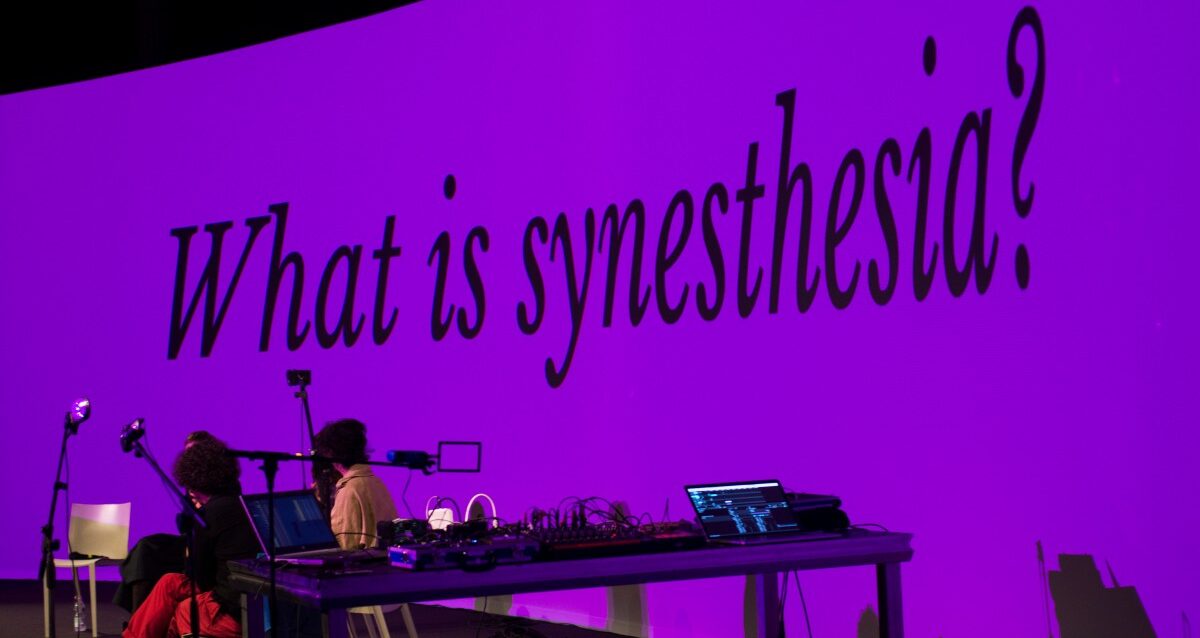 This is our report of the Live Cinema Festival 2020: we listened, we watched and this is how all went down!

It has been a while since our last in-person attendance. We had great expectations from the organizers of the LPM, pioneer audiovisual event with global outreach.

Well, we had a brilliant time! We couldn’t wait to write a report of the Live Cinema Festival 2020. This edition has showcased a painstaking array of amazing audiovisual artists.

The festival took place in the beautiful Acquario Romano – Casa dell’ Architettura in Rome. A minimalistic but very effective set-up featuring a 5x20m curved screen and a powerful sound system.

The necessary gear to truly enjoy an immersive audiovisual festival in this fascinating architectonic surrounding.

Each performance night has been preceded by a symposium about the main topic of the festival. A topic that is very dear to us: “What is synesthesia?”

During the symposia different keynote speakers and the performing artists have explored the theme of synesthesia from a scientific, anthropological and of course artistic perspective.

I am very thankful to the organizers for inviting me as Audiovisual City director to moderate the 15th and 16th October nights talks.

It’s now time to go through the amazing audiovisual artists we had the chance to see at the Live Cinema Festival. Here our highlights of the three great AV nights we attended in the eternal city!

The first show was a great pleasant surprise. You know we love to discover new artists. When we discovered them live is even better!

The electronic music producer Aid Kid and the developer and visual artist Pavel Karafiát have struck up a constantly evolving collaboration.

Their audiovisual performance features a thumping intelligent techno style and an otherworldly shape-shifting visual landscape. They delivered a punchy, colourful and hyped-up show for our indulgence.

The AV duo constantly plays with the synchronization and asynchronization of the techno sounds and video patterns, slowly building up a powerful real-time synesthesia.

It felt like being on a spaceship. We were travelling through an unknown AV galaxy populated by wild geometries in a spiral of entropic disintegration.

Amelie Duchow has showcased her performance TONSTICH, a tribute to her background as a fashion designer. We already had the pleasure to see her live at Splice Festival back in 2018.

She confirmed once again her elegant artistic maturity and outstanding technical quality. A digital tailor fabricating an AV dress utilizing the sounds of the textile machines and visual body patterns.

The visual structure is precise and analytical, uplifted by a powerful soundtrack full of reminiscences from the early German Techno scene.

We are transported inside the very essence of the textile making process. The AV pace is breathlessly intense and each elements of composition connects to each other through lines, dots and numbers: a dress made of data then turned into sounds and visuals.

Amelie works relentlessly on her dress offering out a seamless digital conversation where each word is fine tuned to perfection.

She takes us on an abstract journey through primary shapes and stripped-down sounds, to finally show the sewing machines in an unexpected figurative reveal.

The French AV duo has presented this uniquely ominous project based on the aesthetic “hack” of Google Earth.

The audiovisual artists have scanned the totalitarian project by Google looking for system glitches and extracting images from the platform.

The result is an inhuman, cold immersive environment empowered by a disruptive soundscape.

Images from urban and natural contexts are digitally intervened to create a dystopian landscape, populated by lifeless carcasses from a compressed digital world.

The cities melt in front of our eyes while the soundtrack is in constant crescendo generating an informal aesthetic melting pot.

Finally the glitch takes over the entire composition while the music picks up on a 4×4 rhythm. And the figurative world is destroyed by the total abstraction.

Zagar AV experience is made by Balázs Zságer and Kati Katona. The AV duo leverages the artistic possibilities of spontaneous creations, using a real-time integration of live images combined with animations.

The audiovisual artists explore different shapes and textures during the real-time process through an experimental approach to the AV dramaturgy.

Another great surprise was ORBITOCLAST by Patrick Lechner, cutting-edge Austrian audiovisual artist, who has been creating experimental audio & video content since the mid-2000s.

Patrick Lechner and his team developed an ad-hoc AI algorithm. It allows him to generate and manipulate noisy-glitchy audiovisual objects.

ORBITOCLAST represents the audiovisual excess, the extravaganza. The syncopated pace communicates how the artist is taming this AV force generated by the algorithm.

His creations feel alive as they conquer the space and the audience’ senses. This amorphous digital blob animated live by the performer-puppeteer is terribly magnetic.

We felt as the screen was going to collapse any moment under the live manipulation. On the sides of the screen Lechner shows the data he is artistically intervening, sharing with us his own working space.

Last but not least the French audiovisual artist Maotik, internationally renowned for his generative artwork and creative use of data inputs.

Maotik performed AERYON LIVE, an audiovisual journey from the perspective of a drone flying over a vast digital landscape interpreting data inputs from Google Earth.

The drone scans the data environment by endlessly hovering around. All points of view are fragmented while the shapes are dissolving and reassembling.

We are exploring this fragile, unstable scenario where nothing human is left. Only the terribly mesmerizing representation of data.

The world as interpreted audio-visually by a machine, an effect obtained by the clever use of the generative bespoke algorithm.

Throughout the live act, natural looking audiovisual textures resurface from the amorphous magma, giving some peace while the music mellows down. But nothing can stop the overwhelming ocean of data absorbing everything on its path.

Maotik’s style is mature and refined. He perfectly knows how to keep the audience with their eyes and ears glued on, throughout this indulging AV journey.

We hope you enjoyed our report of the Live Cinema Festival. We thank the organizers for having us and the audiovisual artists for the amazing performances they have showcased. #WeLoveAV

Our article about Live Cinema Festival

Learn more about the artists